A £21million construction contract has been approved to create the connections underpinning a major innovation district being developed in Renfrewshire.

The Glasgow Airport Investment Area project is jointly funded by the UK and Scottish Governments through the £1.13billion Glasgow City Region City Deal and will see new roads, bridges, cycleways and footpaths being built to connect into a site at the centre of the emerging Advanced Manufacturing Innovation District Scotland.

Abbotsinch Road will be upgraded and realigned, and a new bridge spanning the White Cart from Wright Street to an approach road off Arran Avenue, offering access for cyclists, pedestrians and Wright Street businesses. There’s also a new cycle and pedestrian bridge crossing the Black Cart and an off-road cycle link between Abbotsinch Road and the A8 Greenock Road. 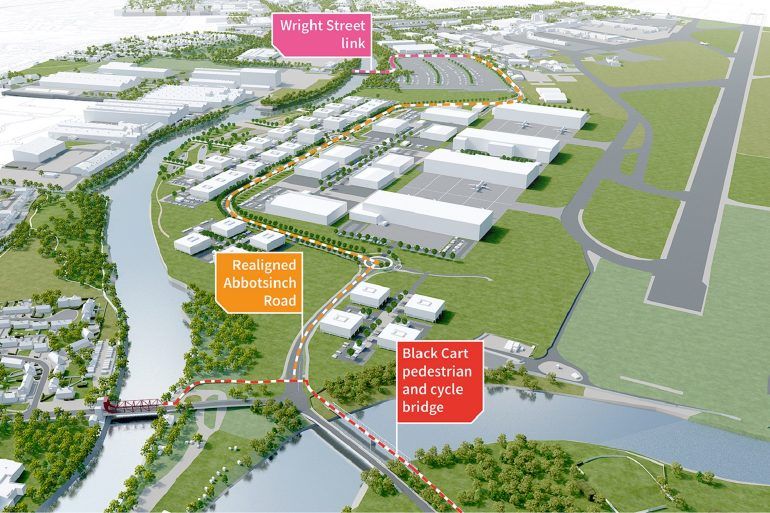 This will all connect into a 52-hectare site next to Glasgow Airport, which is already confirmed as the location for the National Manufacturing Institute Scotland (NMIS) and the Medicines Manufacturing Innovation Centre (MMIC).

Construction work will ensure the site is ready to welcome its new tenants and provide the perfect investment opportunity, focusing on innovation, research and advanced manufacturing.

Work is set to start on the underpinning infrastructure and environmental enhancements this summer and be completed in 2020 after councillors approved awarding the design and construction contract to Wills Bros Civil Engineering Limited.

The Motherwell-based company is currently delivering several infrastructure projects in Scotland, including the Greenhills Road City Deal project in South Lanarkshire and has recently completed dualling the A9 from Kincraig to Dalraddy and the Inverness West Link, with a three-span bridge over the River Ness.

Final procurement procedures are now being completed on the contract award, which follows a detailed 19-month tendering process.

This considered each bidding businesses’ previous experience and technical capability before scoring tenders against factors such as carbon reduction, traffic management and fair working practices.

Almost 60 community benefits are included as part of the contract, including opportunities for apprenticeships, supply chain events for SMEs and support for community projects.

“It is vitally important that the construction contract provides value for money and is awarded to the right organisation with the skills and commitment to achieve its aims. I am pleased that through the diligent procurement process this contract includes a series of important community benefits, including local job opportunities and I look forward to seeing their impact over the coming years.”

The construction contract award is subject to approval of the Full Business Case by the Glasgow City Region Chief Executives Group.

The Glasgow Airport Investment Area project is one of three Glasgow Region City Deal infrastructure projects in Renfrewshire. More than 2300 jobs are expected through the Clyde Waterfront and Renfrew Riverside project, which includes the first opening road bridge across the River Clyde, while the Glasgow Airport Access Project is working to deliver a new transport link to Glasgow Airport, recognising its critical contribution to the regional economy.

NMIS will be an industry-led international centre of manufacturing expertise where research, industry and the public sector work together to transform skills, productivity and innovation to attract investment and make Scotland a global leader in advanced manufacturing.

Hosted by the University of Strathclyde, it is being delivered through a partnership with Scottish Government, Scottish Enterprise, Highlands and Islands Enterprise, Renfrewshire Council, Scottish Funding Council and Skills Development Scotland.

It's exciting to have manufacturing innovation based locally and the development of the advanced manufacturing district by the airport will put Renfrewshire out in front.

Renfrewshire is the perfect home for Scotland's national manufacturing institute and I am delighted that it will be established here.

It is fantastic that Renfrewshire has been chosen as the home for the National Manufacturing Institute Scotland. It is recognition of our growing position within the international manufacturing sector.