With striking architecture and incredible history ingrained into the fabric of the building, Paisley Abbey really is a sight to behold.

Dating back to the 12th century, Paisley Abbey is recognised as the ‘Cradle of the Royal House of Stewart’ due to its ties to the family.

The Abbey was founded in 1163 when Walter Fitzalan, the High Steward of Scotland – whose descendants became the House of Stewart/Stuart – signed a charter at Fotheringay for the founding of a Cluniac Monastery on land he owned in Renfrewshire.

Set up on the site of an old Celtic church by 13 monks from Much Wenlock in Shropshire, the priory was raised to the status of an Abbey in 1245. The Abbey was dedicated to four saints; St. Mary, St. James, St. Milburga and St. Mirin, who brought Christianity to the church site in the 6th century.

The Abbey would go on to be wealthy and influential under royal patronage, with extensive trade between the Paisley location and commercial centres in Europe.

It would also become a centre for learning. Sir William Wallace, who was a key figure in the Wars of Scottish Independence in the 13th century, is believed to have been educated by the monks of Paisley Abbey.

Princess Marjory Bruce, daughter of the famous Scottish king Robert the Bruce, is buried in the Abbey. In 1316, a heavily pregnant Marjory fell while out horse riding near Paisley Abbey. She was taken to the Abbey infirmary where she tragically died, but her unborn child was saved after a caesarean delivery. The child would become King Robert II of Scotland – the first of the Stewart monarchs. This led the Abbey to claim itself as the ‘cradle of the Royal House of Stewart.’

Princess Marjory’s memorial tomb chest was reconstructed in the 1770’s from medieval carved stone fragments. The Choir area of Abbey holds the grave of Robert III ( d 1406 ), son and successor of King Robert II. The memorial stone dates from 1888 and was gifted by Queen Victoria.

In addition to being an architectural gem with a rich past, the Abbey today – as well as performing religious ceremonies – hosts concerts and cultural events throughout the year, making for a breathtaking spectacle. 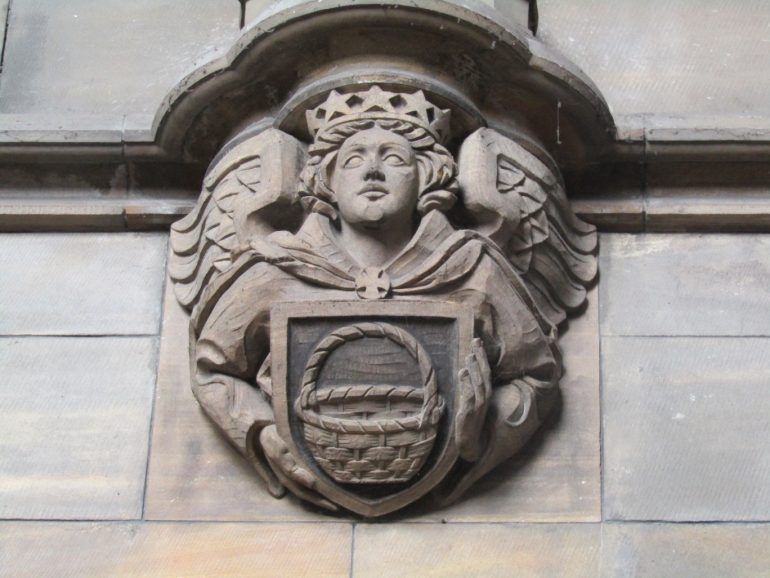 Situated in the restored choir, supporting stone corbels are carved into the likenesses of 12 angels, each with a shield bearing a picture of an object associated with each individual apostle. This includes Philip’s basket, and Thomas’s carpenter’s square. 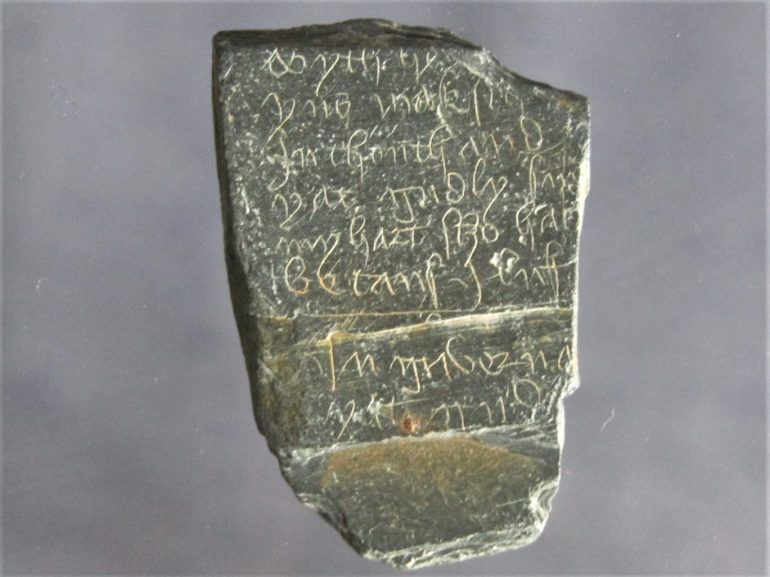 The image above is a piece of carved slate recovered during the excavations in the Abbey drain. The slate is carved with a few lines of poetry, written in the Scots language, in a handwriting style known as “secretary hand”. It has been dated to roughly the 15th Century, making it possibly 600 years old. It may have been written by a visitor to the abbey, perhaps a pilgrim who had come to visit and pray. 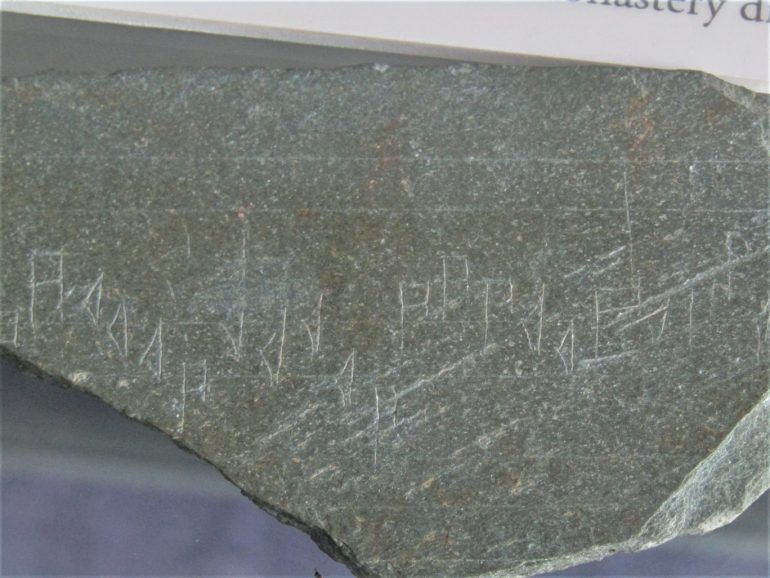 The image above is another piece of carved slate from the Abbey drain. This time, instead of words, musical notes have been carved into the slate for a polyphonic. Like the written slate, this appears to date from the 15th century, and was likely one of a set of several notes for the musicians. 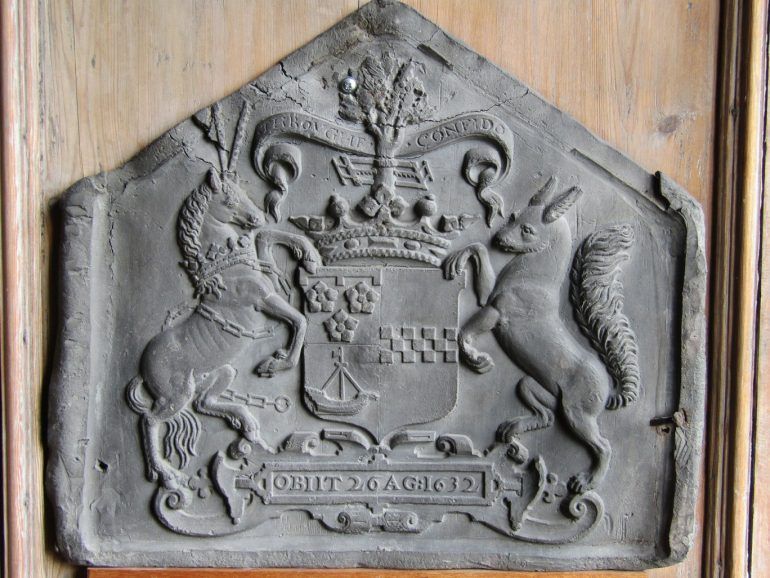 The picture above is the lead crest from the coffin of the countess of Abercorn (d. 1632). The countess had remained catholic after the reformation, and used the St Mirrin Aisle as her own private chapel following the conversion of the Abbey to a Parish church, and the Place of Paisley into a residence for the Hamilton family, to whom she was related. 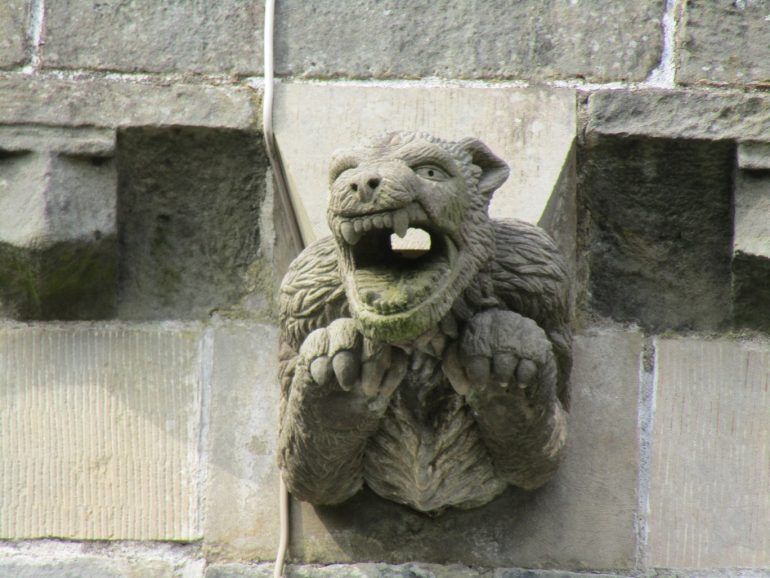 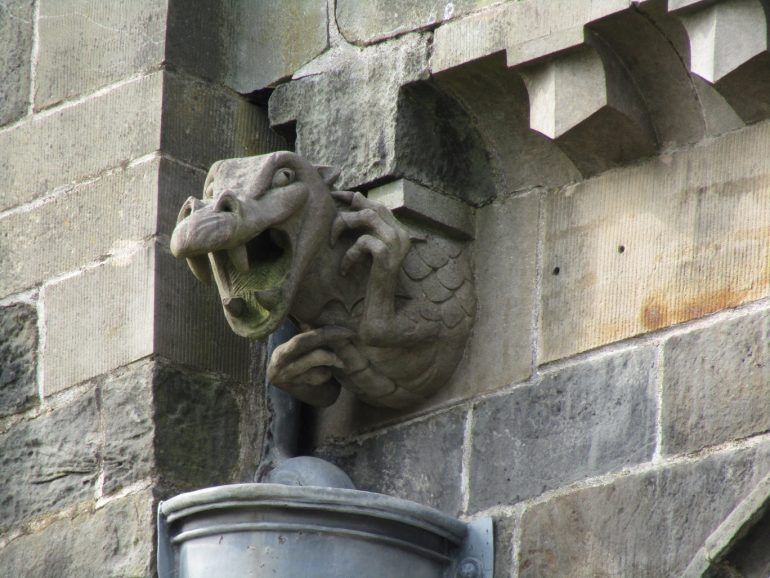 Similar to the Alien sculpture mentioned and pictured at the top of the page, a number of carefully detailed gargoyles can be spotted on the building’s striking exterior.