The Artisan’s Institute – We are Weavers – Lesson 11 Herringbone Weave

What is a herringbone weave?

Herringbone is known as a ‘broken twill’ weave as its geometric zig zag appearance is created by half warp and half weft yarns. The name herringbone is based on its distinctive ‘v’ shaped pattern which resembles the skeleton of a herring fish. 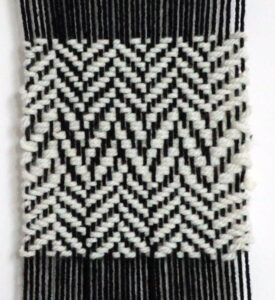 As a herringbone weave repeats after every 4 warp strings and weft passes, warp up a number of strings that multiplies by 4 (for example, 24, 28, 32)…

Weave rows 1, 2, 3, 4 repetitively to build up a diagonal stripe. Refer to the ‘Taking weave off the loom’ video and notes to complete the weave.

Pleased with your creations? We would love to see them. Share your work with us on social media using the hashtags #thcars2 and #weareweavers