Part audio play, part walking tour – history will be brought to life as participants immerse themselves in the stories and places in the town that led an inspiring movement for change.

The Radical War was a week of protests and riots across Scotland in April 1820. The government at the time feared civil unrest due to the rising cost of living and levels of unemployment.  A particular connection for Paisley is the gathering at Miekleriggs Muir in Sept 1819 – it was at this time that rioting occurred in the streets of Paisley and the Riot Act was read several times within one week. 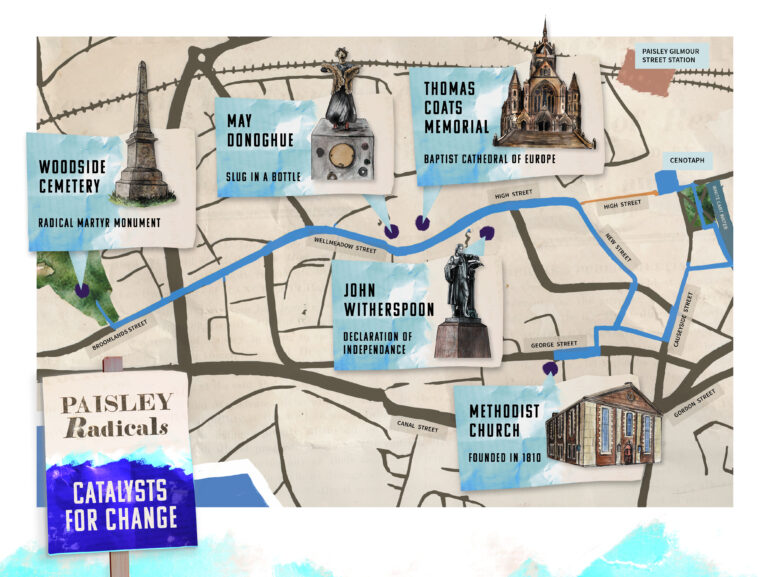 Participants begin the tour, which takes approximately 90mins, at Woodside Crematorium and the Martyr’s Chapel and journey from there down the High St passed a number of Paisley’s key landmarks including the statue of May Donoghue, Coats Memorial Church, the statue of John Witherspoon, Willie Gallagher Cairn, Methodist Church – illustrated in the app by local Paisley artist Josef McFadden – then along the River Cart at Forbes Place to Dunn Square finishing at Paisley Cross.

The walking tour app has been produced by Civil Disobedience with app development support from Inner Ear, funded by Future Paisley and the Paisley TH.CARS2 programme, which is jointly funded by National Lottery Heritage Fund, Historic Environment Scotland and Renfrewshire Council.