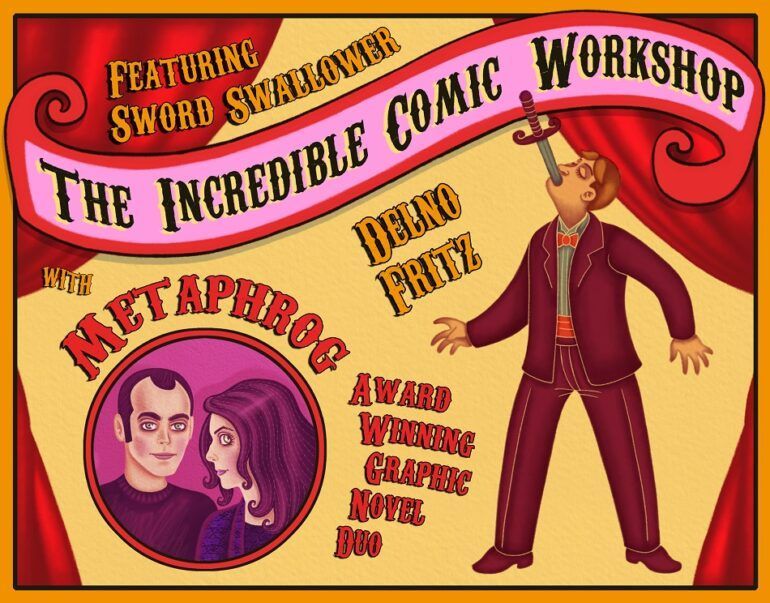 Graphic novelists Metaphrog were appointed to deliver a series of face-to-face drawing and comic making workshops with local young people, taking the life and times of Delno Fritz as inspiration.

Born in America in 1871, Delno was a sword swallower and fire eater who travelled to Scotland in 1897 with Barnum & Bailey Circus. There he met, and in 1899, married Maud D’Audlin from Paisley. Settling in the town, he became a well-known figure locally, managing the Empire Music Hall on Moss Street. During this time, he trained Maud as a sword and electric light swallower. In 1907 they returned to America to pursue a career in vaudeville and circus. Together they performed around the world, including a show for King George V and Queen Mary. Maud, at the time one of only a handful of female sword swallowers, died in 1920 from an injury sustained as part of her act. While in Los Angeles, Delno appeared in a number of films before his death at home in Pennsylvania in 1925.

Due to the pandemic, face-to-face workshops had to be abandoned. Instead, Metaphrog delivered an initial block of online workshops with a group of young people from Create Paisley, followed by a second block of workshops with senior students from Mary Russell School.

Work created by five of the Mary Russell School participants has been turned into short animations which can be viewed below.


The Lore of Tesco by anon:


The Truth of the Descendant of King Arthur by anon: