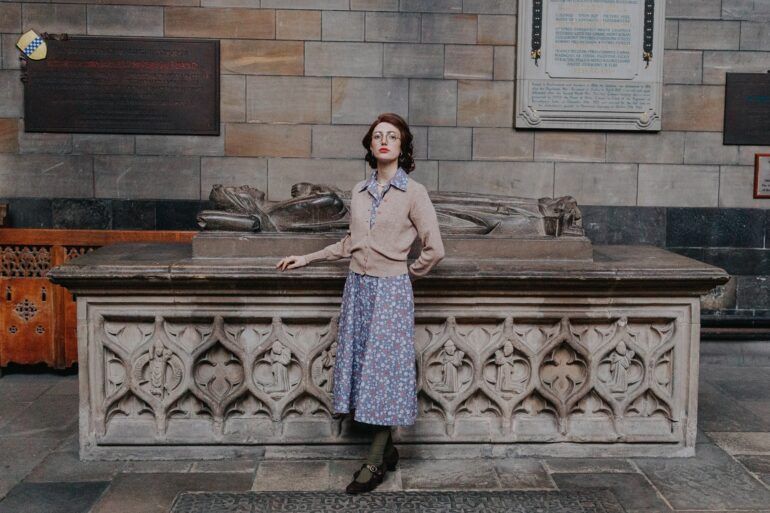 Using recycled fabrics, costume designer Lilja Husmo has worked with a group of adults from ReMode to create outfits for three significant women from Paisley’s past: Victorian philanthropist Jane Arthur; turn of the century sword swallower Maud D’Auldin; and 1940’s missionary Jane Haining. The costume designs have been informed by research into each figure’s life and work, as well as the fashions of the day. Photographs of the completed outfits being modelled at locations around Paisley town centre have been shared publicly to mark International Women’s Day 2022 and draw attention to three inspiring life stories. These images highlight how relatively few named women are celebrated in the public realm. 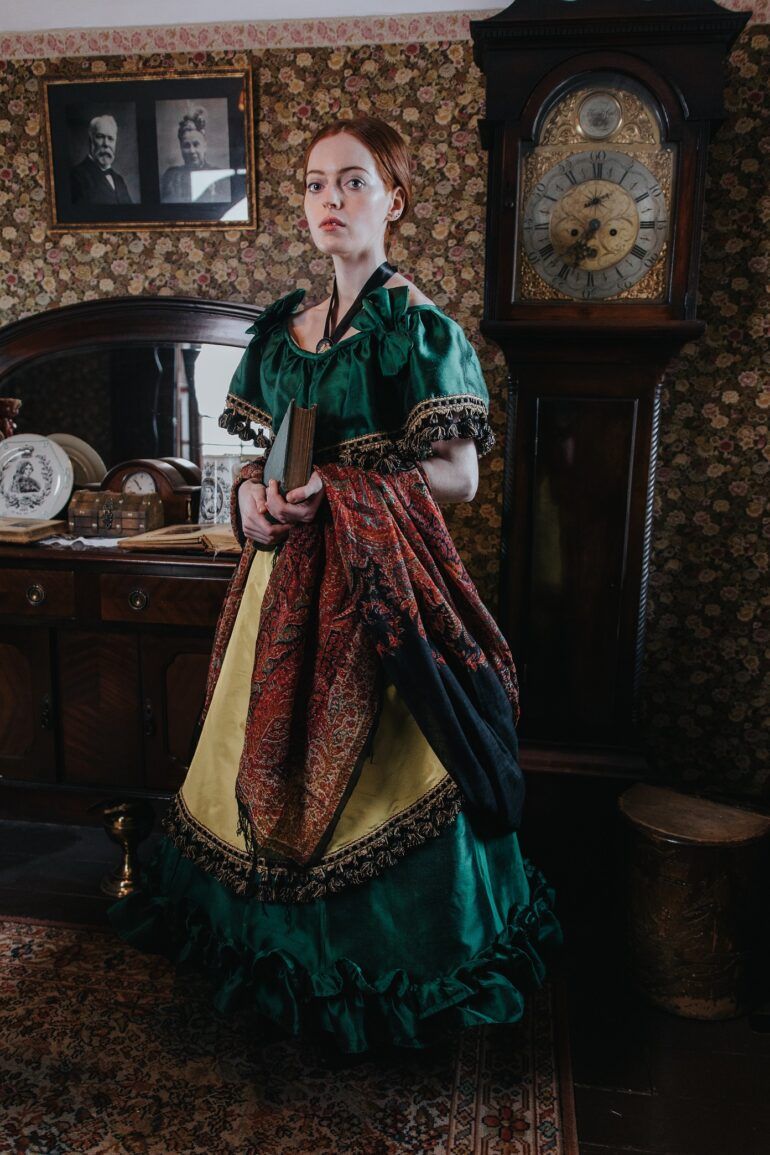 Jane Arthur was a prominent philanthropist during Paisley’s 19th-century textile boom. She was born in the town in 1827. Aged 20, she married James, who owned a successful clothing business, and they and their five children eventually moved into Barshaw House. Jane was a tireless advocate for those less well-off and served on the committees of many local charities.

In later life, she was a prominent campaigner for women’s suffrage and in 1873 became one of the first woman in Scotland to be elected to public office, when chosen to serve on the first Paisley school board – winning more votes than all nine of her (all male) rivals. In memory of her late husband, she established the Arthur Fellowship to promote the medical education of women.

Jane Arthur is pictured outside the Scottish Friendly Girls Society building on Weighhouse Close and in the parlour at Sma’ Shot Cottages. 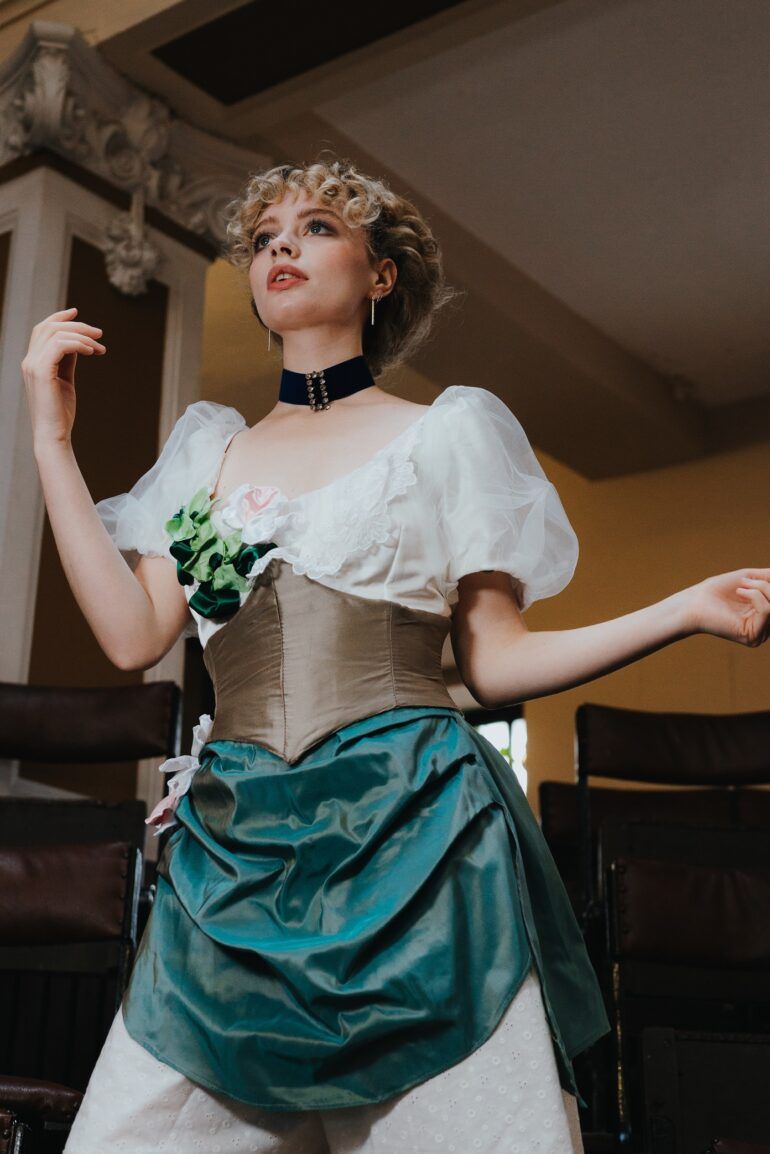 Maud D’Auldin was a sword swallower and electric light swallower. She was born in Paisley around 1878 and in 1899 married Delno Fritz, who she had met two years before in Glasgow while he was touring the UK with Barnum & Bailey circus. She became one of only two female sword swallowers of the time, and became widely famous for her act, performing alongside her husband.

She lived and performed in the UK before the family moved to the US in 1907. Maud and Delno had performed before the King and Queen of the UK in 1920, but she died that year after an incident on board a cruise ship from injuries sustained as part of her act. 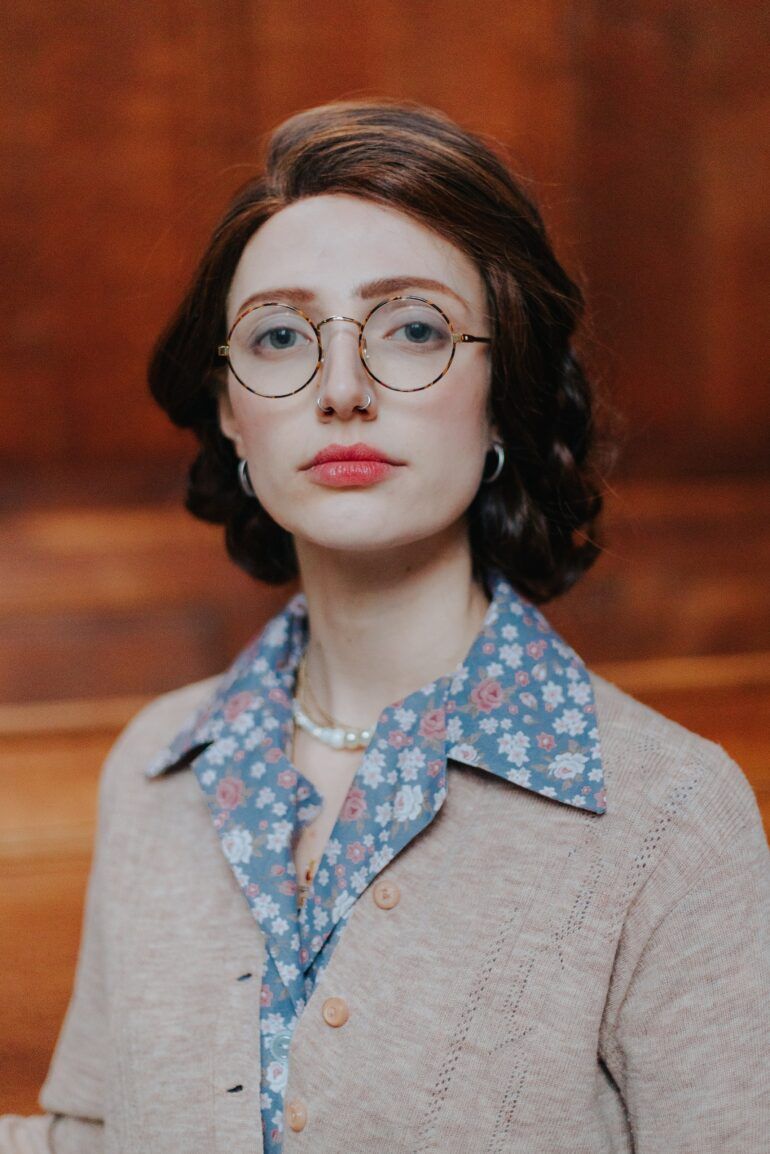 Jane Haining was one of the few Scots to be killed by the Nazis in a death camp during WW2. Originally from near Dumfries, she was a secretary at JP Coats in Paisley in 1932 when she saw a Church of Scotland advert for missionary work with the Scottish Jewish Mission in Budapest, and promptly moved to Hungary to become matron of a girl’s home.

During WW2 she continued working and caring for the girls at the school, and defied orders to return to Scotland. Because of her open sympathy for her Jewish students, she was arrested by the Gestapo. Among the charges was that she had wept while sewing the yellow stars she was obliged to attach to the clothing of the Jewish girls. She was originally taken to the local prison but was soon moved to Auschwitz, where she died in 1944, at the age of 47.

Jane Haining is shown inside and outside Paisley Abbey.

Special thanks to the following project participants for collaborating with Lilja on the design and creation of the finished garments:

Thanks to the following for making this project possible: designer Lilja Husmo and the volunteers and staff at ReMode; KAIROS Women+ for sharing their historical research; historian Lil Brookes for sharing her expertise; Fraser Scott of Kick the Door for photography; our models Louise McWilliams, Rebecca Murphy and Emma Whitelaw; Beth Duffy for hair & makeup; Sma’ Shot Cottages; Paisley Methodist Church; and Paisley Abbey.