The Bascule Bridge, Renfrew: Meet the only remaining rolling lift bridge in the country

The Bascule Bridge is a major feature on the main approach to Renfrew town centre from the airport. To this day, people gather to watch the grade A listed structure rise into the sky.

But do you know how the only remaining rolling lift bridge in Scotland came to be? Find out with this blog by Rachael Morris.

Before the affectionately known “tin bridge” was constructed, there were several other structures which stood in its place and the local landscape sustained some significant changes too. In fact, records suggest that there were three swing bridges across the canalised part of the White Cart at Inchinnan Bridge between around 1792 and 1920.

Up until 1759, a ford or ferry helped people to cross the joined mouth of the Black and White Cart. But as the 18th century progressed, it became more obvious a road bridge was needed to improve travel between the growing city of Glasgow and Renfrewshire. So in 1759, an arched stone bridge was constructed on the site of the former fording place. This ran in a straight line across the mouth of the Black and White Cart rivers, connecting with the Abbotsinch Paisley Road. However, there were lots of shallows close by and small vessels couldn’t always get their masts underneath. This bridge eventually collapsed due to floodtides in the early 19th century and two separate bridges, which are still in use today, were built to replace it.

Around 1790, to improve navigation of the White Cart water to Paisley, a half mile long canal was cut at Blythswood, to ease the river’s problems for the few craft which used it, forming the stretch of water which the current bridge raises itself skyward over.

The first bridge to cross this new canal seemingly lasted until 1835. The Clyde to Paisley River Improvement led to its replacement. In 1876 the bridge was replaced again, before this structure finally became completely outmoded in 1920, as both road users complained about the condition of the road and Paisley Shipbuilders complained about the bridge’s waterway obstructing capabilities.

In 1920, power was granted to the burgh of Paisley to improve the navigation channel at Inchinnan and replace the old swing bridge with a more modern structure. The following year, Sir William Arrol & Co. received the contract for the new bridge.

Construction for the new bridge broadened the White Cart’s channel at the bridges from 48 to 90 feet so that much larger boats could now pass down, answering the complaints of Paisley shipbuilders, who found the narrowness of the river had previously limited the size of craft that could be erected in their yards. During the construction, a light railway was even laid to haul excavated materials upstream in trucks.

The new structure featured a clear opening span of 90 feet, with a 20-foot roadway and two footways for pedestrians. When open, it reaches a height of almost 120 feet above ground. And while the previous structure was a hand operated cast iron bridge, with a capacity limited to a three-ton vehicle, the new bridge is electrically operated and offered a much improved capacity of 30 tons.

The project cost around £62,000 to complete, costs which were shared between Paisley Town Council, Local Authorities and the shipbuilders on the Cart.

Approximately three years after receiving the contract, the inauguration of the bridge took place on Wednesday 21 March 1923. A 6,000 strong crowd came to watch Provost Lang formally declare the new Scherzer style bridge open. The Provost’s remarks were short and to the point, “I now declare the bridge open and may it have a longer and a much more useful life than its predecessor.” After the bridge was lowered and the crowd had lined up across the footway for a photograph, the invited guests hopped into waiting cars and travelled over the new bridge to Paisley, where tea was served with Provost Lang presiding. A week later, on Wednesday 28 March, the bridge officially opened for use. 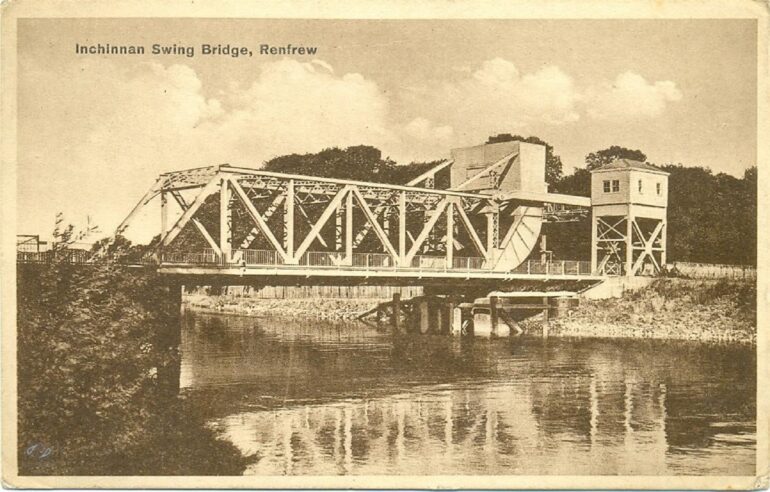 The new bridge formed a very important link in road communication between Glasgow and the lower reaches of the Clyde, greatly increasing traffic facilities on the roads between Glasgow and Greenock, and giving access to Ayrshire and the South of Scotland. However, the structure also provided a vital water gateway which improved access from Paisley Harbour to the Clyde and sea.

In 1936 it was reported that the bridge was raised 20 times a week to allow shipping to proceed to and from Paisley Harbour. However, since the closure of Paisley Harbour in the late 1960s, it is now almost an event to witness the bridge being raised.

Later, Babcock and Wilson in Renfrew relied on the bridge for transferring heavy structures on barges. While it was reported in 1975 that the bridge had only opened for two vessels in the last three years, Babcock and Wilcox said the bridge was vital to the future of their factory.

“The “tin bridge” has been part of Renfrew’s history for many years and it is really important to take a moment to recognise its significance as the only remaining rolling lift bridge in the entire country. The bridge is a historical working exhibition of engineering and, to this day, it is held in high regard in the engineering world.

“Lots of people travel far and wide to see the bridge opening. And for those of us who live locally, I think we are quite spoiled to have such a marvel of engineering on our doorstep and to see the bridge lit up in all its splendour.

“For nearly 100 years, the Bascule Bridge has been part of our history and stands proud as it says welcome to or goodbye from Renfrew.” 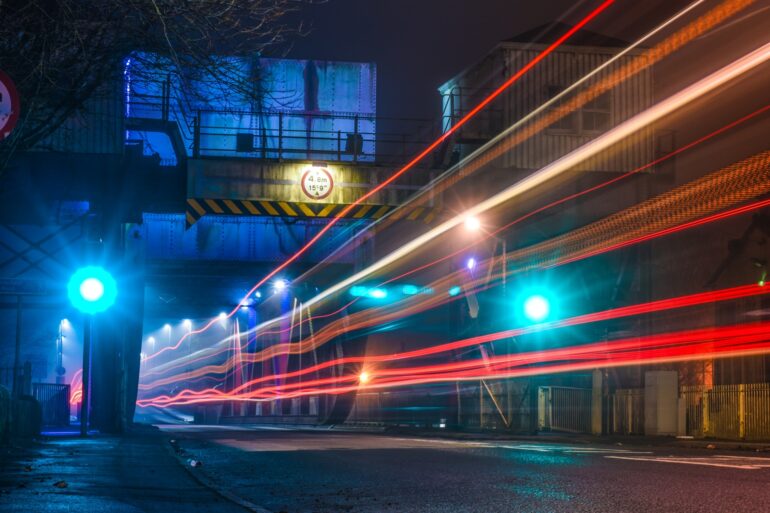 Protecting the future of the Bascule Bridge

Since the bridge was built, a number of repair and restoration works have been undertaken to help safeguard the future of the structure.

Between 2001 and 2004, Renfrewshire Council undertook major restoration work on the bridge to save the important road link from imminent closure, whilst also removing a long standing weight restriction and re-establishing the opening facility to secure the use of the water for freight and pleasure craft.

Due to the complexity and historical significance of the bridge, the restoration was carried out in several stages and required careful planning and coordination. A major new architectural lighting system was also installed in complementary tones to highlight this unusual structure. The restoration work cost in excess of £1 million and was awarded a commendation from the Saltire Society for Civil Engineering.

In more recent years, it is a rare occasion to see the giant iron arm of the bridge lifting skyward over the Cart, but it is an impressive sight none-the-less. And to this day, people still gather to watch the only surviving bridge of its kind in Scotland roll back on its special track and lift into the sky above the White Cart water.