Vevar, an old Scots spelling of weaver, is Glasgow’s newest weaving mill, established by award winning designers Chantal Allen and Christopher McEvoy in 2020. With over 20 years’ experience of design and manufacture between them, it was an exciting prospect for all at the Sma’ Shot Cottages to collaborate with such innovative and exciting designers and craftspeople.

Christopher employs the history of Scottish textiles within his work, drawing on his familial connection with the textile industries in Paisley and The Calton, historic influences which have seen Christopher produce pieces for fashion houses including Alexander McQueen and Charles Jeffery’s Loverboy. Working as a teacher and weave technician at the Glasgow School of Art, Chantal’s innovative and colourful designs have enabled her to travel to India, where she designed and developed Jacquard woven fabrics for the European and American markets.

The Old Paisley Society were approached by Chantal and Christopher last year, with their idea of producing a limited edition, hand-woven scarf inspired by the collections of the Sma’ Shot Cottages which would be sold to raise funds to aid our work in preserving Paisley’s textile past.

The Sma’ Shot Cottages were opened by the Old Paisley Society in 1985. Volunteer owned and run, the Cottages’ complex explores two distinct periods in Paisley’s textile past, through the eighteenth and nineteenth centuries. The original Paisley weaver’s cottage, built in the 1750s on Shuttle Street, was first occupied by weaver David Lawson and his family. Shuttle street was populated, almost solely, by those involved in the textile trades through the eighteenth and nineteenth centuries. Initially built to house weavers and their loom shops, Shuttle Street soon came to accommodate winders, sewers, pattern setters, washers, starchers, silk finishers and even a shoemaker. 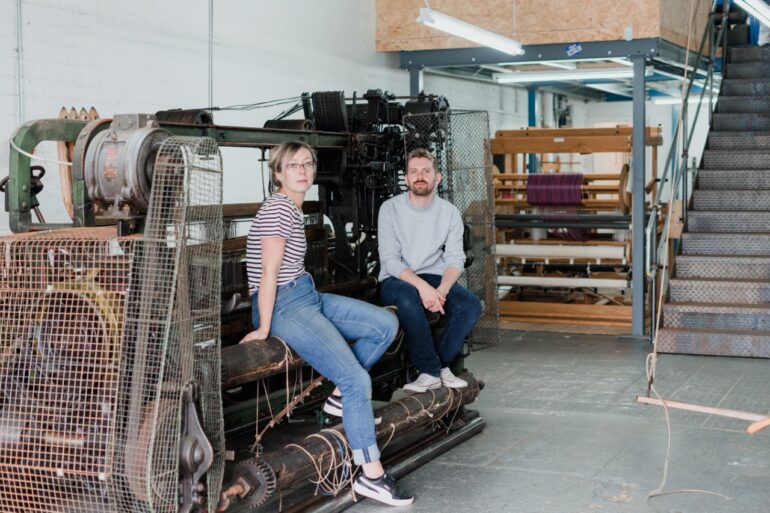 In working with Vevar to create a unique scarf celebrating the textiles of Paisley, Chantal and Christopher were able to visit the Cottages, immersing themselves in the history of the Paisley weaver. The collections of the Cottages are vast, and would prove to offer immeasurable design inspiration. Artefacts including original nineteenth century Paisley shawls and quilts made up of nineteenth century fabrics including Turkey Red were used to inform the design of the Sma’ Shot Scarf, and can be seen in the inclusion of Paisley pines in a distinct madder red making up the scarf’s border.

Both Chantal and Christopher have won several awards for their work, and have established their own brands, named Warped Textiles and McEvoy Textiles. Through Vevar, Chantal and Christopher’s shared passion for Scottish textiles is proving to celebrate the history of textiles in Scotland while also preserving the craft of weaving for future generations.