Jamie Russell, 17, was one of our youth volunteers at the Paisley Halloween Festival 2022 – and here is his report from the festival from a teenager’s point of view.

Plus, scroll down to see some fantastic videos from the event, shot and edited by Jamie’s friend Felicite McIlkenny.

Reports are coming out from Paisley Town Centre of aliens, dragons and comically-large spiders roaming the high street!

Welcome to Paisley Halloween Festival 2022 – a hauntingly heart-warming night for the whole family.

In October, I had the pleasure of travelling around the town during the Paisley Halloween Festival, speaking to local families and businesses about their experience. 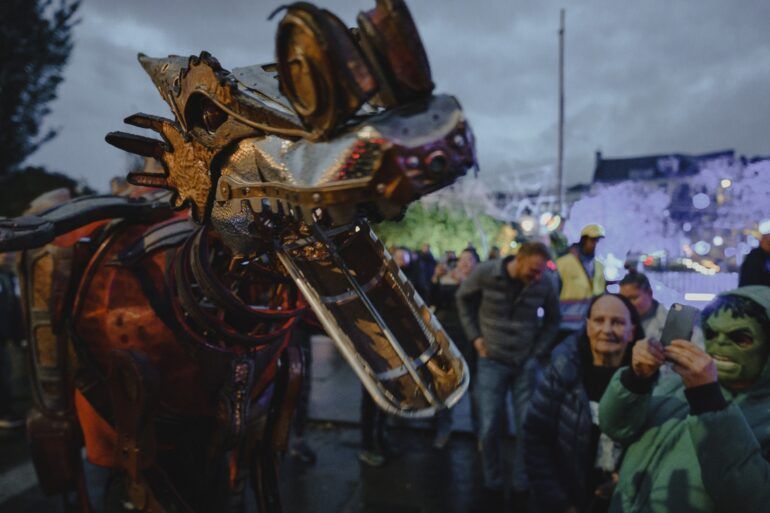 With events spread across the whole of Paisley, local performer Holly Robinson kicked the night off with a beautiful rendition of Adele’s Easy On Me from the main stage.

Puppeteers manned the arms of a frightening spider that travelled the grounds of Paisley, until it nested in its own spider’s lair beside the Town Hall.

Even Renfrewshire Council’s offices weren’t out of the action. Dr. Kronovators Fire Laboratory pyrotechnics display brought a frightening fury to the night on the grass beside Renfrewshire House. There wasn’t a spot where you weren’t surrounded by excitement. 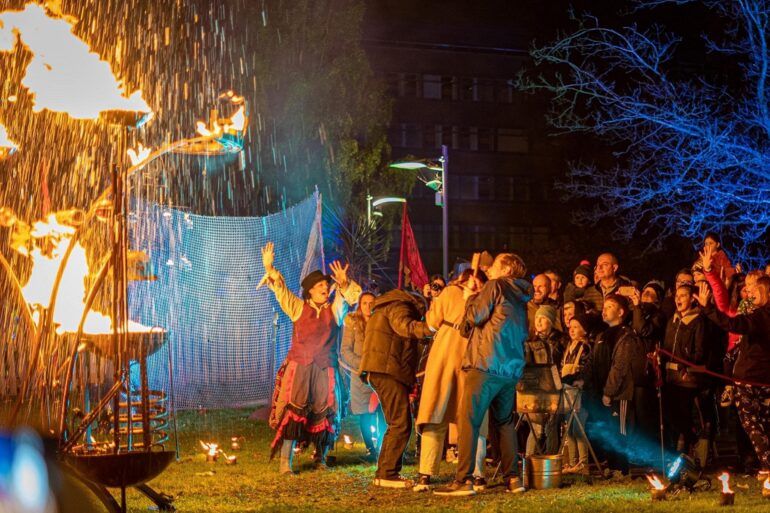 Families in fantastic costumes could be seen everywhere. My personal favourite was a young father and son dressed as Ash Ketchum and Pikachu. When I spoke to them about what the festival does for Paisley, they said: “It allows a lot of people to come together, meeting up outside, to have some family time with the ones they care about”. When asked if they would return, Ash replied: “Yeah, absolutely.”

All of Paisley was involved in the Halloween Festival. Young people (us included) were all over the rides – the classic Twister, Ghost Train, and a supersonic version of the Waltzer.

Even through its performances, the Halloween Festival supported Scots. Performers came from local drama groups from as far as Edinburgh. I spoke with the father of a young performer, who said his daughter, Robin Gilhoolie, had been preparing for three weeks for the event.

When asked what the festival did for Paisley, he said: “It brings all the community together.”


That’s what’s brilliant about things like Paisley Halloween Festival – it helps everybody get behind Paisley and work together on something great.

Families and businesses from all over Scotland came to be in our town and get engrossed in the fun. The sense of community could be felt everywhere.

I spoke with a young boy named Oliver, 10, who travelled with his mum and two siblings from Port Glasgow. He was so excited to speak to me – I reminded him I wasn’t the BBC. We had just watched Pyroceltica, one of the main performances, and he loved it. He said: “It was absolutely amazing, I don’t know how they actually do it…I’m really impressed.”

I asked him about his festival experience as a visitor to Paisley, and he said: “It’s been really good, I’ve had a lot of fun here… I’ve really enjoyed it.”

I then asked for one word to describe Paisley, and he said “amazing”. His mum agreed and said: “We come every year… it’s free, you can spend as much or little as you want… it’s great.”

Oliver and his family aren’t the only ones who travel to Paisley. Thousands of Scots flock here for the festival every year; creating brilliant opportunities for local business, encouraging them to keep their doors open later, and allowing vendors to travel into the town.

I spoke with two local business owners, Charlotte and Amid from Nomads Coffee, located across from Paisley Museum. It’s a fantastic rustic café who kindly let us in to speak during their chess night. They thought the festival was great for business, as it “brings all kinds of people to Paisley and into the shop…it makes the whole of the town centre feel exciting, and fun…it’s just a great atmosphere.”


They continued: “We opened just after lockdown, so it was quite quiet at the beginning… but more and more the streets are getting busier. More and more customers know us… business is getting stronger and stronger all the time. I feel like Paisley is becoming a more vibrant place.”

They thought Paisley’s cultural offer had helped: They added: “People know Paisley for different reasons. They’re talking about the architecture it has, they’re going to the Abbey, they’re going to the museum. It’s bringing a lot of people in.” Their words to describe Paisley were “eclectic” and “hidden-gem”.

Not far from the High Street, Dunn Square was transformed into a food market. Before the festival launched, I spoke with the owner of the “Churros, Baby?” food-truck, who had travelled from Hamilton to be at the festival.

I asked about the positive impacts of festivals like Paisley Halloween. They said: “Any community event, especially if its free is great… as people have that little extra bit of money to spend, it brings the people out. The organisers have been really helpful… its been really nice”.

“We’ve been speaking to a few people today who saw photos from last night and didn’t know it was on but are going to come and bring their kids over because it looks so good.” Her one word to describe Paisley was, “colourful”. 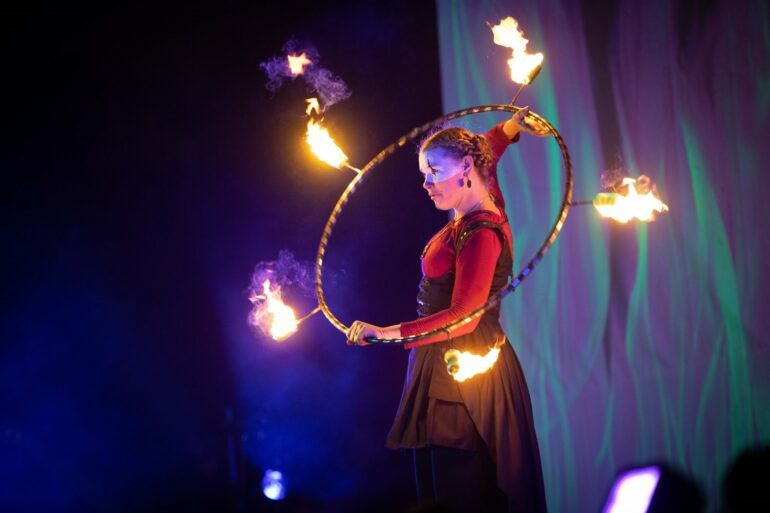 It was brilliant speaking to all these people about their experience with the festival, but what about what goes on behind the scenes? I spoke with one of the performers from Pyroceltica, an incredible fusion of traditional Scottish ceilidh dancing with fire, dubbed Celtic Fire Theatre.

For the past twelve years, they’ve toured Scotland and abroad. They had only performed the Halloween Festival show seven or eight times, but rehearsed it for over a year. The performance was flawless, and they were a clear crowd-favourite.

He said: “It’s always one of the biggest factors. You’ve got to entertain the people, there’s a bunch of tricks that you know will always get the big reactions.”

That was certainly true, as the crowd was extremely interactive with the performance responding with cheers and claps. When asked what he thought the festival did for Paisley, he was extremely enthusiastic on its positive effect. He said: “It’s amazing… it looks brilliant, everybody’s done such a good job on the setup and making it all look great. The last one we were at in 2019, was amazing. The quality of the production was just full marks.” 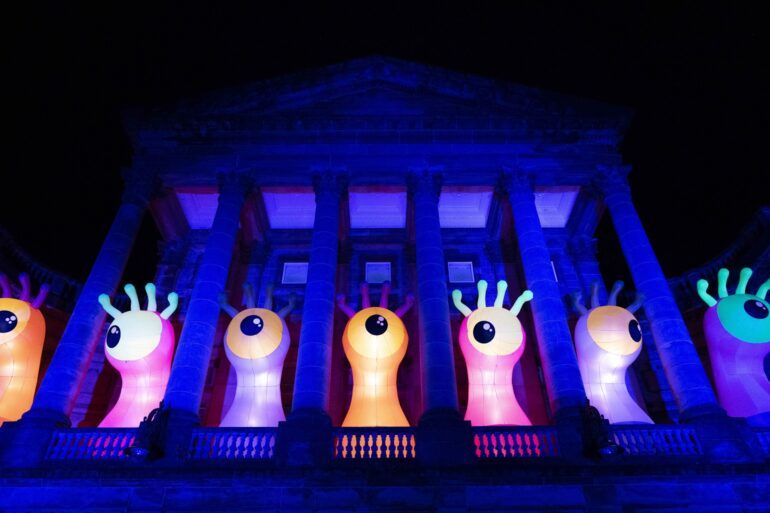 Paisley Halloween Festival not only was a highlight for families, but every person we saw, was having a great time. Felicite McIlkenny and I, who volunteered at the festival together were extremely thankful for the opportunity Renfrewshire Council and their team gave us, but also happy to have had such a fun time.

Events like the Halloween Festival are so crucial for Paisley as echoed by every person we spoke to. It brings the community together in all sorts of different ways whether through the public visiting with their families and friends, performers, vendors, businesses, volunteers – everyone comes together to create something very special.

We saw first-hand behind the scenes of what occurs, and the events-planning and organisational minds behind the festival are fantastic at what they do. Paisley is a brilliant place to be.