These eye-catching artworks from the Paisley First Wall Murals series are well worth discovering.

It’s easy to take a stroll around town and get a glimpse of all the beautiful murals designed by fantastic local artists.

Scroll down to find a selection to whet your appetite… and see them all located in the map below.

Which one is your favourite? 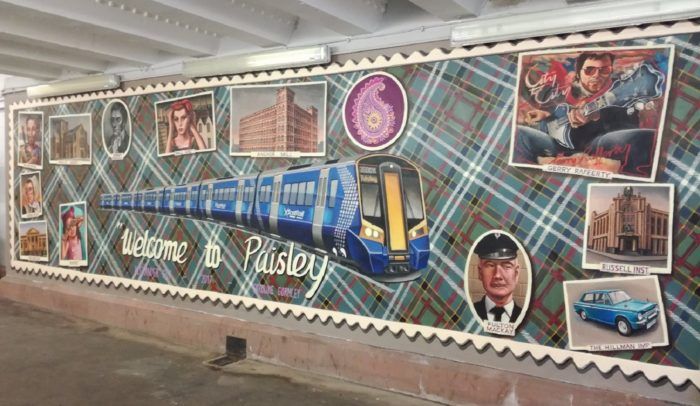 Rail commuters are welcomed to Paisley by this stunning artwork which celebrates iconic people, places and moments from the town’s past – everything from a mill girl, a burning witch and Gerry Rafferty to Fulton Mackay, the Russell Institute and the Hillman Imp car.

“First port of call is getting on the train that brings you to Gilmour Street station, the gateway to Paisley and its vibrant culture, which will definitely give you something to write home about.”
Caroline Gormley, artist 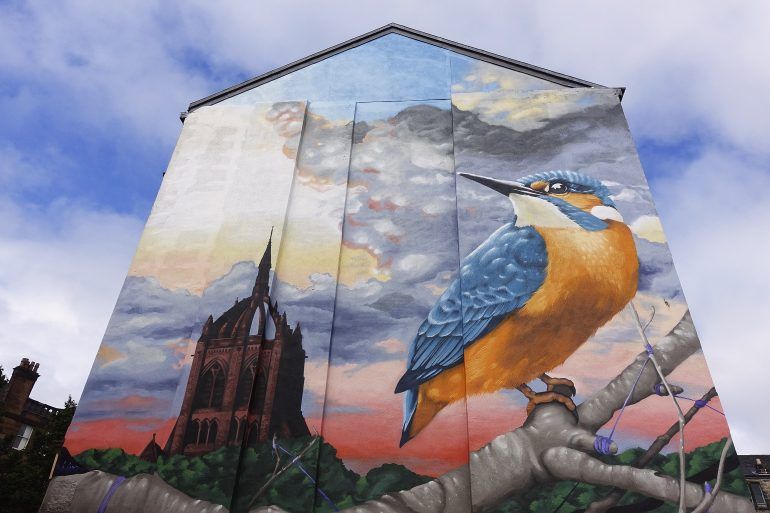 This stunning 16-metres-tall mural depicts a beautiful kingfisher perched next to a ball of yarn, with the iconic Thomas Coats Memorial Church building in the background.

The kingfisher represents the life and work of Alexander Wilson, considered the father of American ornithology. The yarn draws on Paisley’s rich heritage of textile production and the church building is a nod to this same heritage and its architectural legacy.

“At 16 metres, this is one of the highest murals I’ve ever painted and it’s certainly the most unusual. Ross and I have had to do training to operate the scissors lift to get up and down the gable end!”
Mark Worst, artist 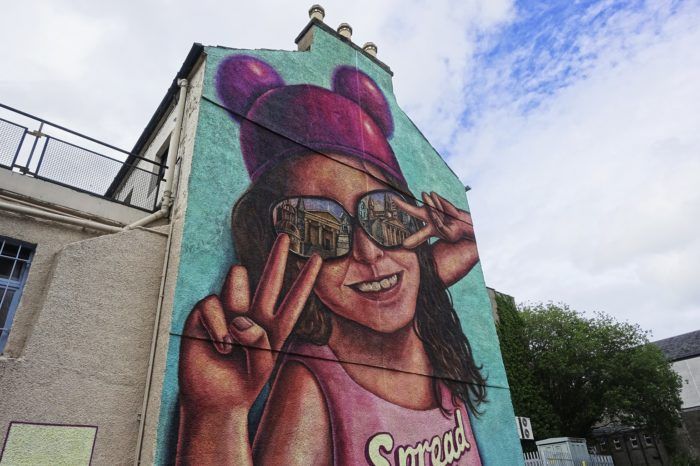 Local girl Eva Rose Ross is the star of the ‘Buddie’ artwork on Storie Street. The then-7-year-old won a competition to be commemorated on the gable end of the popular Allan’s Snack Bar and her sunny image has brightened the street since.

“This mural encourages young people to be curious and to engage with their rich heritage. Hopefully, it will inspire them.”
Caroline Gormley, artist 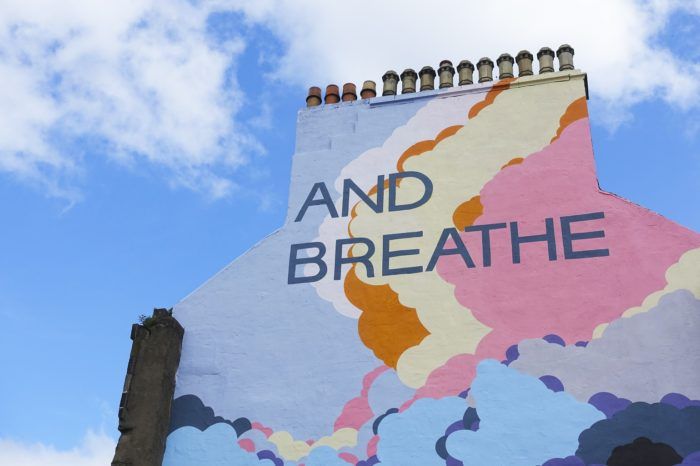 ‘And Breathe’ is a collaborative effort between local artist Duncan Wilson and the Made in the Mill group, which uses art and creativity to aid recovery. Many have taken its message to their hearts and it speaks powerfully to the importance of positive mental health.

“We hope that everyone will connect with the message of ‘getting your head above the clouds’ and taking time out to relax and breathe.”
Sarah Grant, creative arts co-ordinator 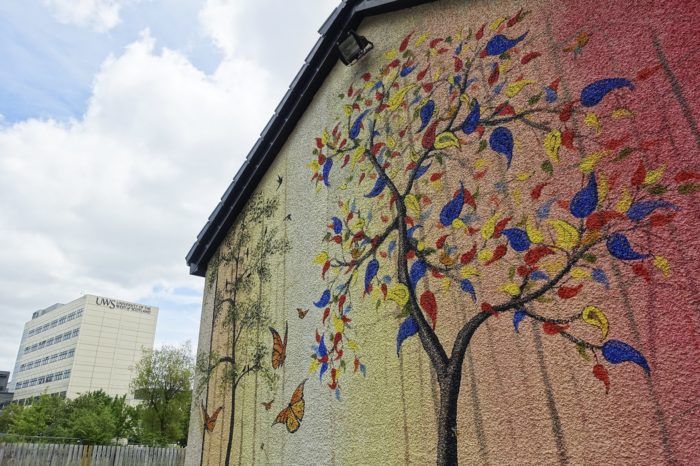 This stunning work incorporates a tree with roots, the Paisley pattern and butterflies – all signifying birth and re-birth – as well as a small marker to the famous ‘slug in the bottle’ case. 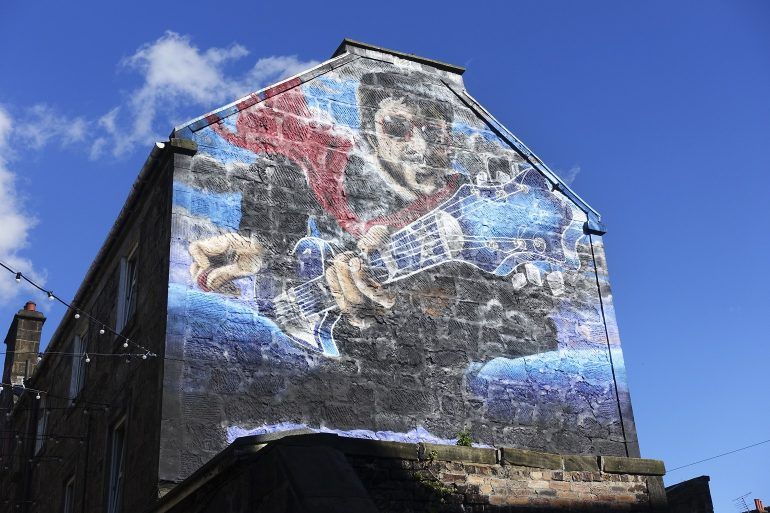 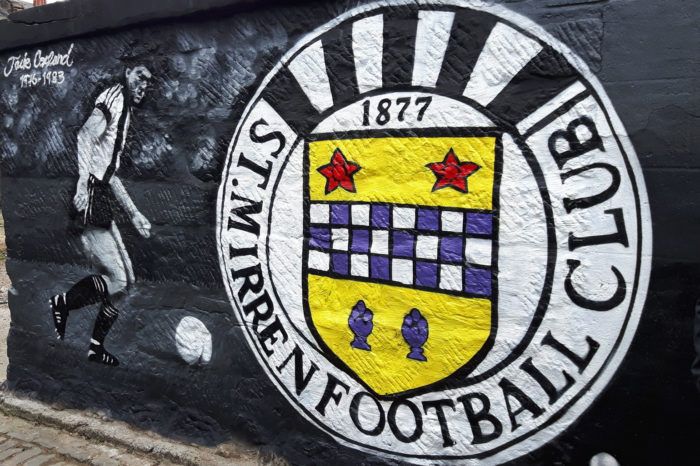 One of Paisley’s hidden gems; Browns Lane is home to several stunning artworks that you can marvel at while walking along the cobbles.

I love the friendliness and sense of humour of the people, and also the rich history of the place.