Journalist and broadcaster Nicola Meighan visits Brown’s Lane and the Gerry Rafferty mural to reflect on the singer’s Paisley roots and his timeless resonance in the town.

Way down the street, there’s a light in his place. Gerry Rafferty was born round here, in Underwood Lane – an address that’s set to become the title of a John Byrne play written in memory of the man and his work.

In the meantime, you can stumble upon him a few roads yonder – illuminated and larger-than-life – on the gable-end of a tenement in Brown’s Lane, thanks to Danny McDermott’s mural tribute to one of Paisley’s most distinctive, best-loved and sorely-missed voices. 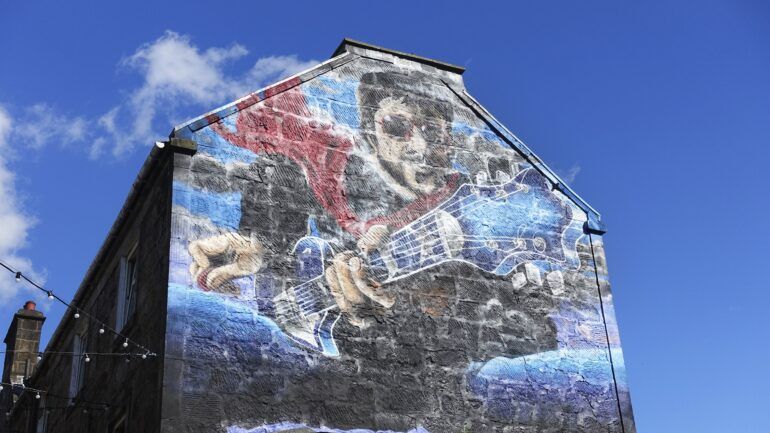 The son of Mary Skeffington (immortalised in his song of the same name), Gerry Rafferty wove a folk, pop and rock ‘n’ roll tapestry that charted – among other things – a collaboration with Billy Connolly in ‘60s banjo cads the Humblebums; a ‘70s union with with fellow Paisley buddy Joe Egan in folk-rock harmonists Stealers Wheel (whose songs included the timeless Hollywood favourite, ‘Stuck In The Middle With You’); and a hugely successful solo career that included hits like ‘Baker Street’, ‘Get It Right Next Time’, ‘Night Owl’, ‘City to City’ and ‘Right Down The Line’.

We lost Gerry Rafferty in 2011, but his voice and songs continue to ring out across the town, and over the world. Paisley has hosted various tributes to him over the years, including the Bring It All Back Home series of concerts in 2014 – which starred Rafferty’s daughter, Martha, and long-term friends and collaborators Barbara Dickson and Rab Noakes, among others – and 2017’s mass saxophone rendition of Baker Street, as part of Paisley’s 2021 City of Culture bid, to mark what would have been his 70th birthday.


Throughout his musical life, another Paisley comrade – the artist, playwright and renaissance man John Byrne (Cuttin’ A Rug, Tutti Frutti, The Slab Boys, the forthcoming Underwood Lane) – visually brought Rafferty’s music to life, thanks to a series of striking record covers, ranging from from early Humblebums releases to Rafferty’s 2021 posthumous album, Rest In Blue.

Among that latter record’s gorgeous songs is a version of ‘Wild Mountain Thyme’, which crackles with Rafferty’s heartening, heartbreaking voice, and traces its roots back to Paisley’s original weaver poet, Robert Tannahill, whose 18th Century work, ‘The Braes of Balquhither’, evolved into ‘Wild Mountain Thyme’.

You can visit Robert Tannahill’s statue outside Paisley Town Hall; you can wander up to the Rafferty mural, round the corner from the Bungalow Bar; you can even make your way to Gerry Rafferty Drive. Their words, their songs, their ideas and images light up these streets. Will ye go, lassie, go?


Nicola Meighan is a music and arts journalist and broadcaster (The Herald, STV, BBC Scotland). She presents the Afternoon Show on BBC Radio Scotland, every Friday, 2-4pm.