My name is Mairie Schwarz. As a student of Paisley’s twin town I’ve been living in Fürth since I moved from my parents home in July 2017. Paisley and Fürth have been twin towns since 1969 – and they have so many amazing similarities.

At first I thought it would be a boring town with a lot of fine old buildings which facades are now peeling away. The city adjoins the large city of Nuremberg, just as Paisley is very near to Glasgow.

Surprisingly, I discovered that there is a lot more to Fürth than I first thought. Now you can witness a lot of new business emerging in its town centre and the wider region. Moreover, there are many stunning sights waiting for you to explore. Similar to Paisley, Fürth has a outstanding historic heritage and understated beauty – and wide range of restaurants to delight every taste. Whether you go on a rustic pub crawl in winter or soak up the beer garden atmosphere on Gustavstraße in Summer – you’re in for a treat.

Today, I can tell you that I really love living in this absolutely beautiful city, because I fell in love with its unique charm and the quirkiness of the city’s people. And that’s why I want to show you some of its nicest places and their similarities to Paisley’s gems in this blog.

Fürth is more than a thousand years old and blessed with over 2000 historical buildings – that’s more than any other Bavarian city in proportion to its inhabitants. Paisley is also well known for its rich built heritage and has more listed buildings of anywhere in Scotland outside of Edinburgh.

In my first Blog I already showed you a picture of our Town Hall – a monumental building which was cunstructed between 1840 and 1850 in the neo-classical style. Its 180 feet tower is the landmark of the city of Fürth. With a little touch of imagination it could remind you of a mixture of the Anchor Mill and the clock tower of the Paisley Town Hall, don’t you think?

Fürth Town Hall – Photo owned by the City of Fürth 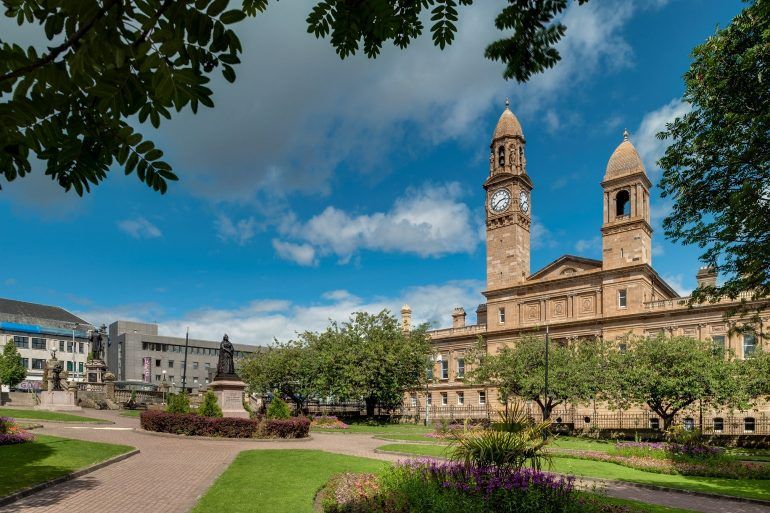 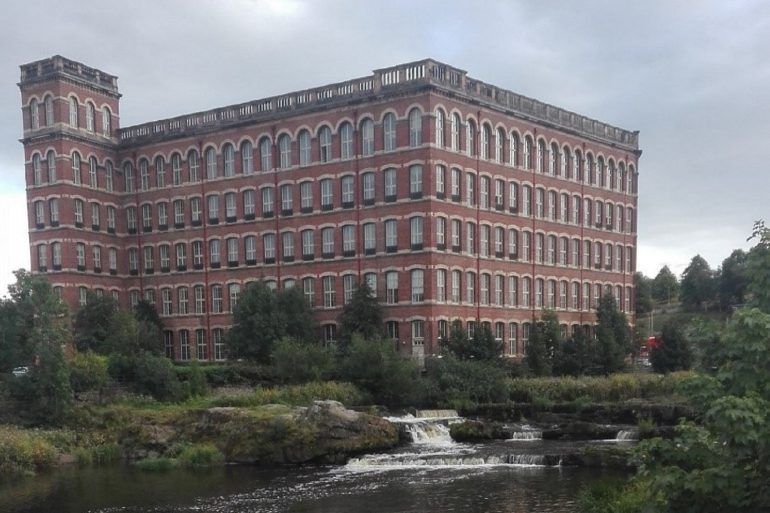 Please have a look inside our Council Chamber. It has been designed and furnished with a loving attention to detail. 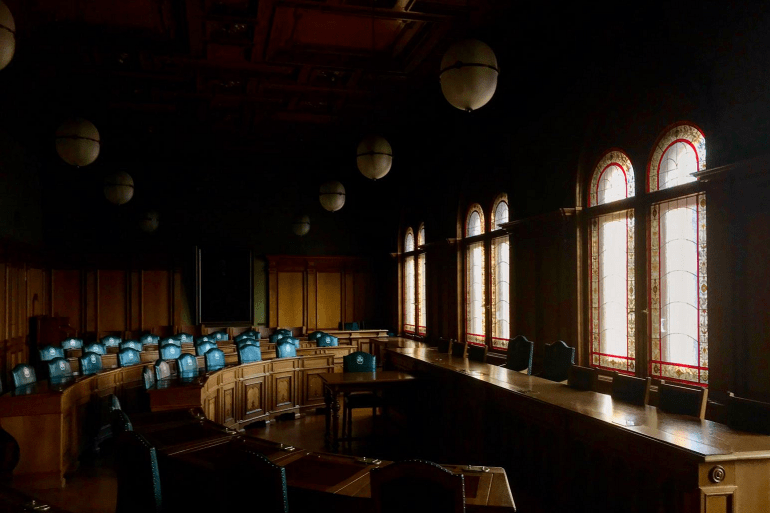 Next I want to show a picture of our beautiful St Michael’s Church which is the oldest edifice in Fürth. The beginnings of this fortified church date back to 1100. The small market town, St Michael’s is just a simple, unadorned village church. The tower with its west portal, the chancel and the south entrance are from the gothic period. The interior is in 19th century neo-gothic style. However, it strongly reminds me of the Oakshaw Trinity Church – the highest point of Paisley’s townscape. 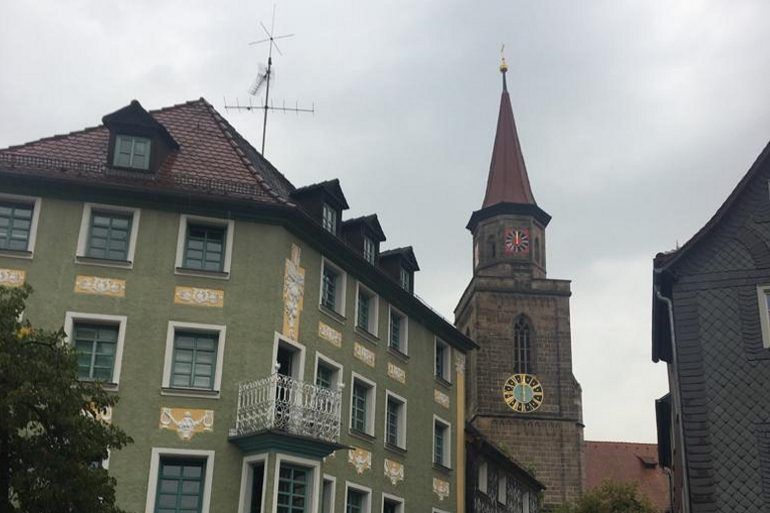 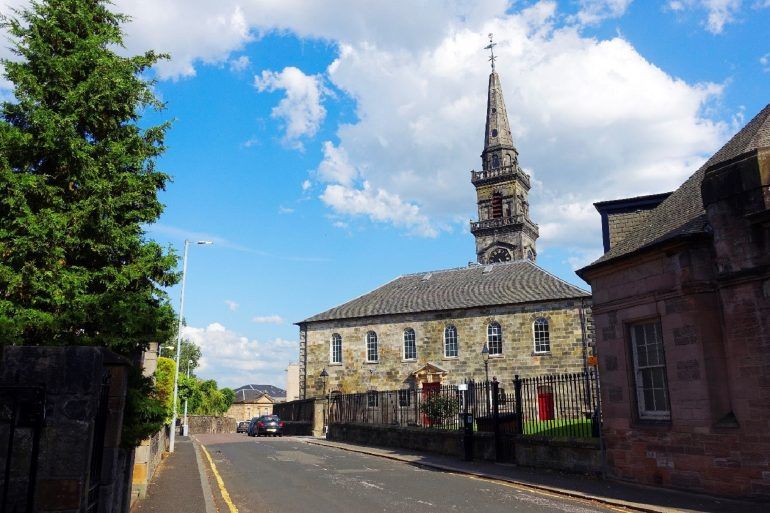 Aside from that the beautiful architecture at Paisley’s High Street  – for example the Liberal Club designed by James Donald in 1886 – has got common features to Fürth’s High Street called Schwabacher Straße, but also to Fürth’s Hornschuchpromenade/Königswarterstraße. This outstanding promenade is unique in Fürth. From 1883 to 1904, prestigious stately homes with rich sandstone ornaments were built for Fürth’s upper classes. At this time, the green central reservation was used by the Ludwig railway – living close the the railway tracks was considered fashionable. Fun Fact: The first German railway “Adler” (eagle) took to the tracks between Nuremberg and Fürth in 1835.

Fürth’s Schwabacher Straße – Photo owned by the City of Fürth 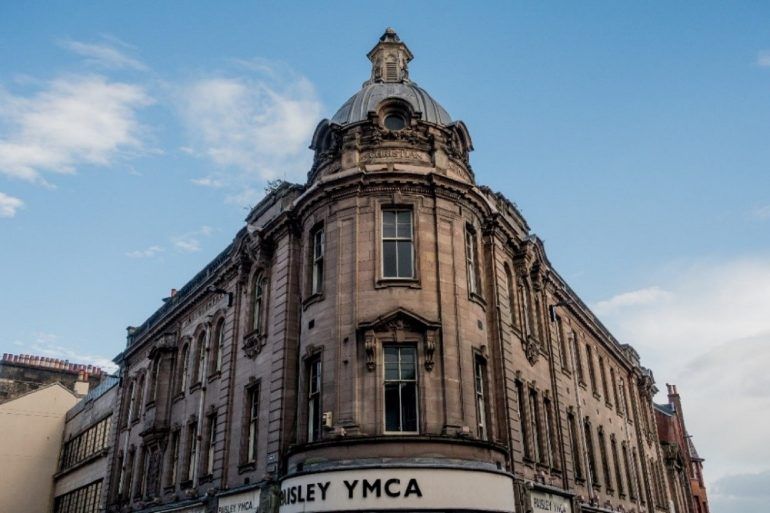 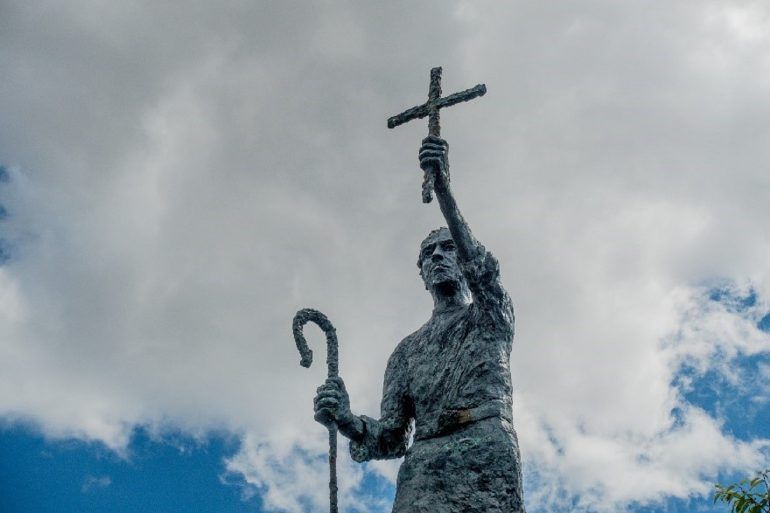 Fürth is a wellkown place for Franconian Comedy, too. This former institute of adult education – built in 1904 – may remind you of Paisley’s St. Matthew’s church or the Paisley Arts Centre, because they are also places for indoor theatre, music and comedy events. Today, the renovated art nouveau buildings home to the playhouse, restaurant and scene bistro of Fürth “Comödie” and more resently to the Grüner brewery. Its unique in-house productions attract attention far beyond the city borders. 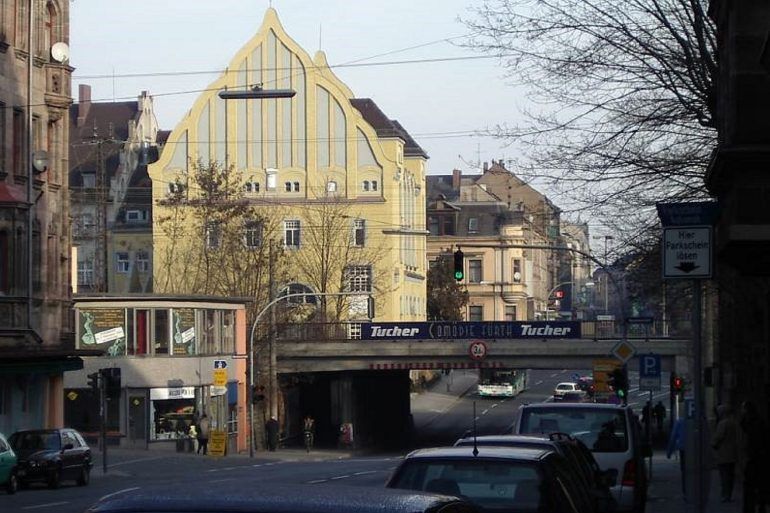 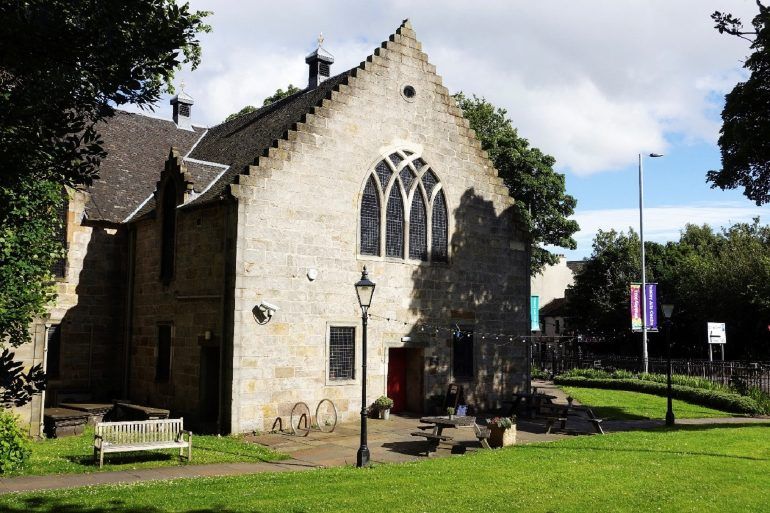 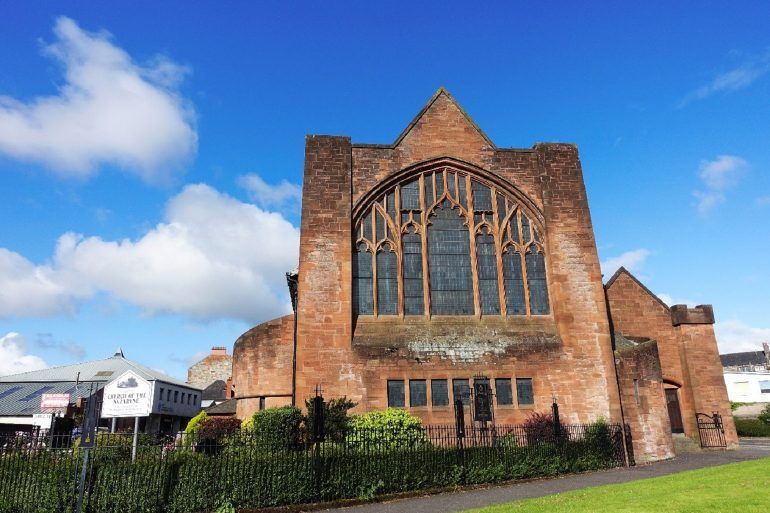 Rivers and the City

I live in the the south-end of Fürth and it’s really a nice place to settle down, because my flat is located right next to the river Rednitz, where you can find traces of the old river bath. It joins with my favourite home river Pegnitz which comes from the bigger city Nueremberg to form the important Franconian River Regnitz to the northwest of the old town. The Main-Danube Canal is to the west of the town. You can definetly compare these waters to the White Cart River and the the Forth and Clyde Canal. 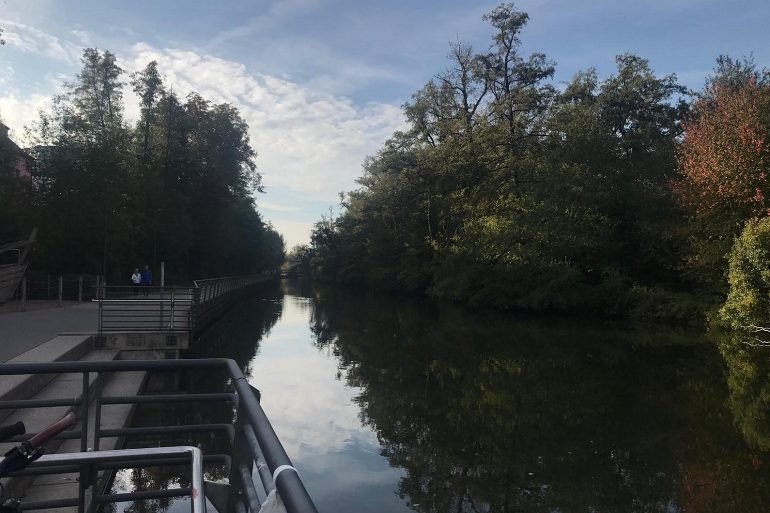 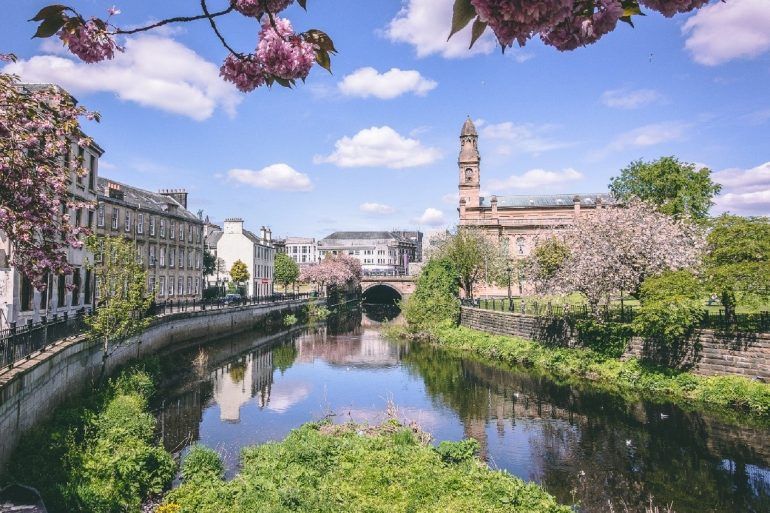 It’s hard to compare a German beer festival to a specific fesitval in Scotland, such as our town’s festival “Michaeliskirchweih” – which is celebrated each October for almost 900 years. But I think Paisley’s Food and Drink Festival and Weave and Sma’ Shot Day celebrations are as close as it gets to our grand steet festival, with its charming mixture of market and funfair. It always comes with a big parade supported by local groups. Similar to Paisley, there are many other events you can go to as well, such as the New Orleans Music Festival, the literature festival LESEN!, classic open air events, two Christmas markets and the “Grafflmarkt” (flea market).

If you’re interested to learn more about your sister town Fürth, please check out Fürth impressions or Cloverleaf impressions. Thanks a lot for reading!

Many urban areas would love to have a measure of the pedigree that this post-industrial conurbation boasts. Aside from its textile legacy, and illustrious denizens, Paisley has an incredible architectural heritage, from the 12th-Century Abbey, with its glorious Edward Burne-Jones windows, to its Victorian Observatory, to the stunning Art Deco Russell Institute.